MY PRE-RELEASE REVIEW of

Miss Celia Fitzgilbert’s grandfather has decreed she must marry a man with a title or he’ll never reveal her mysterious father’s identity. But her engagement to an Earl was already broken, leaving her steeped in scandal. She has all but given up until the reclusive Duke of Clairemont returns to Society and sweeps her off her feet, a potential solution to all her problems.

But things are not so simple for the duke. Aiden is not comfortable with his position in Society, perhaps because he is a fraud. In truth, Clairemont died months ago and the man playing him is a spy, bent on uncovering a dangerous secret. A flirtation with Celia, meant to help him fit in, quickly turns very real. But can Celia recover when the lies come out? And can Aiden keep them both alive long enough to even consider a future?

FREE For a Limikted Time at:

An unloved English heiress…
When shy Maryssa Wylder refuses an arranged marriage, her father exiles her to his isolated holdings in Ireland, a hell he claims is populated by savages eager to slit English throats. On her journey, she is robbed by the Black Falcon, an Irish highwayman who curses all with the Wylder name. A brigand he may be, yet she can’t forget the way he looks at her—his dangerous passion piercing her lonely heart.

A dispossessed Irish prince…
Tade Kilcannon has every right to hate the Wylders. Though his ancestors were Irish kings, the English have stolen his birthright, giving it to Bainbridge Wylder, a ruthless English overlord who drives the Irish crofters from their homes. Though the people of the glen think Tade Kilcannon is a rakehell, in truth, he is the Black Falcon, a masked patriot who bedevils the English. But this rogue’s heart is untouched until Maryssa Wylder saves his family from marauding soldiers.

A love worth defying two worlds…
Maryssa blossoms because of Tade’s tenderness, but he knows that to love the English daughter of his family’s great enemy is impossible. Then disaster strikes the glen, throwing Tade’s fate and the future of those he protects into Maryssa’s hands. Maryssa faces a heart-wrenching choice, one which may cost her the very life of the man she loves.

In the Arms of a Pirate 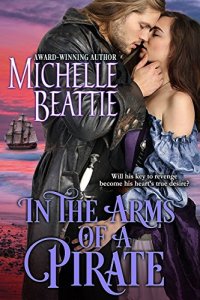 She’s his leverage
When Aidan Bradley suddenly remembers his bloody past, he can only think of one thing. Killing the bastard responsible. His key? Using his enemy’s daughter to draw the pirate out. His miscalculation? That he’d soon find himself enticed by her innocence and beauty.

He’s her rescuer
Sarah Santiago’s lived her entire life locked away from the world. While naïve and innocent, Sarah recognizes attraction when she feels it and the pirate holding her as bait soon becomes the pirate she wants to hold.

The odds are against them
Will Aidan’s desire for revenge cost him the woman he loves, or will his decision to stand down cost him his life at the blade of the soulless pirate who murdered his mother?

The Debutante is Mine 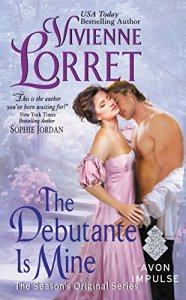 Lilah Appleton’s prospects are looking dim. With one last chance to find a titled husband before she’s forced to wed her wretched cousin, she must make this Season count. Plain, forgettable Lilah must become the Season’s Original. Desperate, she seeks help from the devilishly charming, untitled, and thoroughly unsuitable Jack Marlowe. All she must do now is resist the tempting rogue…

Bastard son and self-made man, Jack Marlowe loathes the aristocracy. When he meets Lilah, he expects her to be like all the other greedy husband-hunters. But she’s far more dangerous. Her alluring smiles and sharp tongue intrigue him. Before he knows it, he agrees to help her find a husband, revealing tricks to ensnare any man. The only problem is, his plan works too well—on him.

When Lilah becomes the belle of the ball, Jack realizes he may lose her forever—unless he can take a chance on love and claim his debutante…

USA TODAY Bestselling Author, Vivienne Lorret loves romance novels, her pink laptop, her husband, and her two sons (not necessarily in that order … but there are days). Transforming copious amounts of tea into words, she is an Avon Impulse author of works including: Tempting Mr. Weatherstone, The Wallflower Wedding Series, The Rakes of Fallow Hall Series, The Duke’s Christmas Wish, and the upcoming Season’s Original Series.

The USA Today bestselling author of The Maddening Lord Montwood, begins a new series with a scandalous bet that could turn one quiet woman into the most desirable debutante of the season.

From the Season Standard: “A true Season’s Original embodies the class, grace, and style of the ton. Such an honor ensures the recipient her pick of eligible suitors…”

Book One of the Sinclair Brothers Trilogy

He was out for revenge.

Laird Robert Sinclair would stop at nothing to exact revenge on Lord Raef Warren, the English scoundrel who had brought war to his doorstep and razed his lands and people. Leaving his clan in the Highlands to conduct covert attacks in the Borderlands, Robert lives to be a thorn in Warren’s side. So when he finds a beautiful English lass on her way to marry Warren, he whisks her away to the Highlands with a plan to ransom her back to her dastardly fiance.

She would not be controlled.

Lady Alwin Hewett had no idea when she left her father’s manor to marry a man she’d never met that she would instead be kidnapped by a Highland rogue out for vengeance. But she refuses to be a pawn in any man’s game. So when she learns that Robert has had them secretly wed, she will stop at nothing to regain her freedom. But her heart may have other plans…

jam-packed with adventure, conflict, and of course love!

Emma grew up in drizzly Seattle, but traded her rain boots for sunglasses when she and her husband moved to the eastern slopes of the Sierra Nevada. Emma spent several years in academia, both as a graduate student and an instructor of college-level English and Humanities courses. She always savored her “fun books”–normally historical romances–on breaks or vacations. But as she began looking for the next chapter in her life, she wondered if perhaps her passion could turn into a career. Ever since then, she’s been reading and writing books that celebrate happily ever afters!