Laird Daniel Murray seeks adventure, battle and freedom for his countrymen. Putting off his duties as laird—with a promise to his clan he’ll return come spring—Daniel sets off with his men to fight alongside William Wallace and the Bruce. But soon he stumbles across an enchanting lady in need. She tantalizes him with an offer he simply can’t refuse and a desire he attempts to dismiss.

Escaping near death at the treacherous hands of a nearby clan, Lady Myra must find the Bruce and relay the news of an enemy within his own camp. Alone in a world full of danger and the future of her clan at stake, she must trust the handsome, charismatic Highland laird who promises to keep her safe on her journey—and sets her heart to pounding.

Together, Daniel and Myra will risk not only their lives, but their hearts while discovering the true meaning of hope and love in a world fraught with unrest. 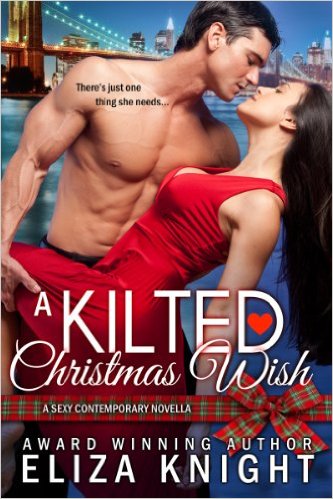 A KILTED CHRISTMAS WISH is a sexy, contemporary novella of about 20,000 words.

Down on her luck with men, Darla Strider wonders if she’ll ever meet her own kilted hero. Considering she lives in present day New York City, the likelihood of that happening is nil. She’s certain only a Christmas wish could make her dreams come true. Until the day Aaron Sutherland walks into her café, and changes her whole world.

Leaving his pain in Scotland for life in the States, the last thing Aaron has in mind is hooking up with a city girl. But one look at Darla and she’s got him singing All I Want for Christmas is You.

The Cry For Freedom and Embrace of Enemy

THE CRY FOR FREEDOM, Book One

A rousing family saga for the fight for America’s independence!

The winds of change brews over the colonies. Tension against the crown is mounting daily. In Williamsburg, the rebellion burns strong in the hearts of two siblings, Jonathan and Hannah Corbett. Spirited and headstrong, Hannah finds herself thrust in the middle of a conspiracy when her father receives a strange package from Philadelphia. Jonathan, a physician for the Continental Army, is torn between duty and family. With war looming on the horizon, the siblings soon discover there is a high price to be paid for the cry for freedom.

EMBRACE OF THE ENEMY, Book Two

It’s a dangerous game you set to play, Miss Corbett. One that can have far worse than deadly consequences!

In the midst of the struggle of America’s bid for independence, Hannah Corbett makes a fateful decision, descending into a world of deceit. Spurred by revenge, she heads to New York, setting in motion a dangerous game for which there is no return. Searching desperately for the man who betrayed her family, she faces the cold and brutal reality of the life of a spy. Caught in a web of lies, living with betrayal, she is trapped. She has nowhere to turn except to a man it would be treasonous to love, setting duty and desire at war. Her heart is ripped apart when she must choose between the man who risks his career and life to protect her and the only thing that has remained constant in her life…her belief in her cause.

Seattle orphan Charlotte is horrified when the evil Mr Graynger informs her that on her upcoming 18th birthday, she WILL become his wife.
But Charlotte simply can’t marry him … she won’t! He is vulgar, putrid and disrespectful – not to mention, over three times her age.
With help from her best friend Beth and the kindly Mistress Belle, Charlotte is soon heading west to marry young farmer Thomas Ackerman in Conrad, Montana.

As her life in Conrad unfolds, Charlotte meets a wonderful mix of townsfolk, including her future husband Thomas, the lovely Louise, the interfering Mabel, and, an adorable 8 year old named Junior.
But even in Paradise, life doesn’t always turn out the way we might hope or expect it to.
Has Charlotte jumped from the frying pan into the fire?
Or might she learn that amidst the mud and the blood and the tears, romance and love can materialize in the most magical, unexpected ways.