All You Could Ask For

Questions for a Highlander books 1-6 Boxset

Catch up for Book 7 Release. 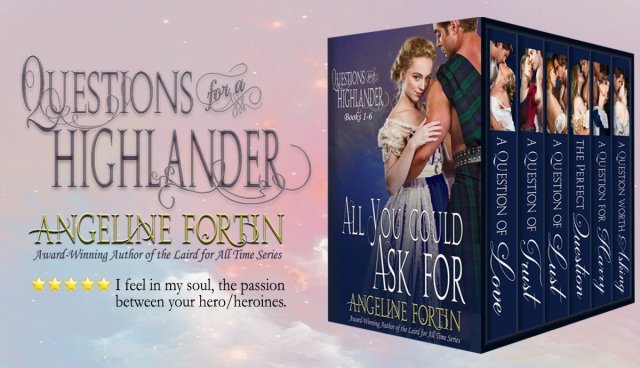 FREE For a Limited Time!

When the ten brothers of the MacKintosh Clan and their sister find love, the fall is hard and eternal. Strong-willed and steadfast, one by one they find true love and boundless passion in these first six, full-length tales of the Questions for a Highlander series that will bring a tear to your eye and a smile to your lips.

A Question of Love:

Years after meeting for the first time, Evelyn Ashley-Cooper, Countess of Shaftesbury, and Francis MacKintosh, Earl of Glenrothes meet once more. But time has changed them both, neither is the young, carefree person they once were. Now they must overcome their pasts and the new obstacles before them before they can rediscover the love they were meant to have.

A Question of Trust: 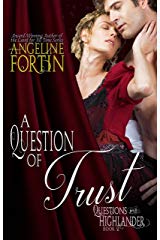 Jack Merrill, the newly conferred Earl of Haddington, has inherited not only an old and distinguished title, but more debt than an honorable man can bear. Desperate for a solution, Jack seeks to marry the wealthy American, Kitty Hayes, as soon as her divorce is final. But can the pair overcome their reservations and learn to trust each other enough to reveal their heart’s true desires?

A Question of Lust:

Vin MacKintosh returns to Scotland years after being presumed dead only to find the world a very different place. But amid the chaos and confusion he finds the younger sister of his old friend, Moira MacKenzie, there offering him her support friendship and love to see him through those difficult days. Vin fights his desire for Moira but discovers that more than lust is at stake.

Captain Richard MacKintosh is on a mission to free his brother from the rebels who hold him but he can’t fight the distraction that is provided by an angelic face from his past, Abby Merrill. How can they find a way to a shared future together when neither of them are free from their past?

A Question for Harry:

This is the tale of how Harry met Fiona… And broke her heart.
They say hell hath no fury like a woman scorned but Fiona MacKintosh was more inclined to believe that after a long, furious journey through hell, no scorned woman was apt to be inclined to love and entrust her heart to a man so easily again.
Especially not to the same man! But there was just something about Harry. The one man who will prove his love … and without question, give his life for her.

A Question Worth Asking:

Widowed suffragette Prim Eames wants nothing more than independence and the freedom to live life on her own terms. Another husband would only serve to snatch that dream away from her forever.
When James MacKintosh proposes a fictitious courtship to spare them both from the matchmakers, it doesn’t take long before she realizes there is a certain freedom to be found in marriage to the right sort of man. If the right sort of man were interested in marriage, that is.
It’s only when betrayal and despair leave them both longing for more in their lives that they realize the importance of a love worth having, and a question worth asking.

BONUS CONTENT: Get a sneak preview of the newest romance in the Questions for a Highlander series, A Question for the Ages, now available!