An Offer From a Gentleman

Sophie Beckett never dreamed she’d be able to sneak into Lady Bridgerton’s famed masquerade ball—or that “Prince Charming” would be waiting there for her! Though the daughter of an earl, Sophie has been relegated to the role of servant by her disdainful stepmother. But now, spinning in the strong arms of the debonair and devastatingly handsome Benedict Bridgerton, she feels like royalty. Alas, she knows all enchantments must end when the clock strikes midnight.

Who was that extraordinary woman? Ever since that magical night, a radiant vision in silver has blinded Benedict to the attractions of any other—except, perhaps, this alluring and oddly familiar beauty dressed in housemaid’s garb whom he feels compelled to rescue from a most disagreeable situation. He has sworn to find and wed his mystery miss, but this breathtaking maid makes him weak with wanting her. Yet, if he offers her his heart, will Benedict sacrifice his only chance for a fairy tale love?

Taken by the Highlander

A WARRIOR WITH A SECRET

Logan MacDonald, fierce warrior and bold scout for Angus the Lion, hides a shameful secret. When he arrives injured at a crofter’s cottage in Campbell territory during a secret mission for his laird, he is immediately suspected of treachery….

A WOMAN WITH A VISION

When Mairi Campbell stumbles across the mysterious wounded Highlander in a moonlit glen—a member of an enemy clan—she is strangely beguiled and cannot resist the desire to unearth the secrets of his darkened soul. Soon, Mairi surrenders to forbidden passion in his bed, which thrusts her into the middle of a war—in a battle for Scottish freedom, and in a battle against the true desires of her heart….

Once Upon a True Love’s Kiss

Available for Pre-Order at Amazon: $0.99 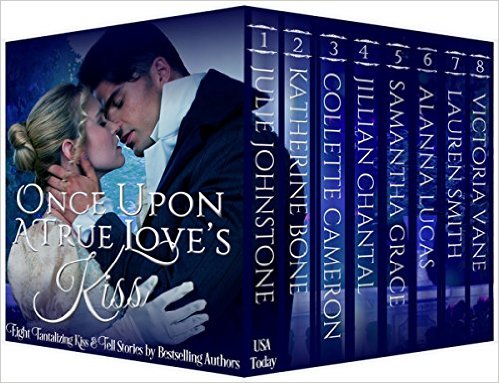 AFTER FOREVER by JULIE JOHNSTONE, USA Today bestselling author. Lady Julia is hired to turn a rogue into a gentleman and receives lessons in love and desire.

THE PIRATE’S DUCHESS by KATHERINE BONE, National bestselling author. A duke masquerading as a pirate to “rob from the rich and give to the poor” sheds his darkest-kept secrets to keep from losing the duchess his wife has become.

HER SCANDALOUS WISH by COLLETTE CAMERON, National bestselling and Award-winning author. A marriage offer obligated by duty . . . an acceptance compelled by desperation.

MILADY AND HER SPY by JILLIAN CHANTAL, 2015 RONE Finalist. A lady, a spy, a traitor… a battle of wills.

KISSED BY A SCOTTISH ROGUE by SAMANTHA GRACE, Acclaimed, RITA-nominated author. Scottish land steward Fergus McTaggert calls a temporary truce with his employer’s companion only to discover their passionate battles have been masking their hidden desires.

STOLEN KISSES FROM THE VISCOUNT by ALANNA LUCAS, National bestselling author. A rake, an heiress, and stolen kisses…this seduction could be his last.

TEMPTED BY A ROGUE by LAUREN SMITH, National bestselling, Award-winning author. Gemma never planned on falling in love with her childhood sweetheart’s best friend, Jasper, when he returns home, but she can’t resist the naval officer’s brooding charm.

THE REDEMPTION OF JULIAN PRICE by VICTORIA VANE, National bestselling author. She gave him a chance to bury his past…but the price would be his heart.

submission. Dare she take the risk?
Book one in the Regency Risks Series

Emotionally scarred in the horrific accident that took her husband’s life, Lady Cranfield is imprisoned by her lingering terror of horses and carriages. She longed to be closer to the fascinating Earl of Ruel. She sensed intuitively that he could teach her how to overcome the terrors that held her in bondage.

And now she’s willing to risk almost anything-her reputation, even her virtue-to find out. But what he proposes startles her.

When the shy, studious and socially awkward young widow approached him, Ruel instantly sensed she would be the sweetest, most submissive experience of a lifetime-if only he can gain her total and complete trust. He makes her a non-negotiable offer. His help in return for her submission and obedience.

But Lady Cranfield grew up neglected by her ducal parents, raised by servants and then later ignored by her handsome, charming husband. She’s learnt to protect her heart at all costs and she trusts no one but herself.

How can the jaded Earl of Ruel break through her self-protective defences and show her how to love when he has spent his lifetime avoiding that tender trap?

Trust Me is the sequel to A Measured Risk

Anne and Jon’s love was born in isolation. Now necessity has thrust them back into Society. Will their fragile bond survive the strain of slander and scandal?

All of Mayfair is staring at her and wondering if she is insane.

Anne Lloyd, the new Countess of Ruel, thought she’d finally begun to heal from having witnessed the terrible death of her first husband. But, from her new husband’s grandmother to his ex-mistresses, it is all that is on everyone’s lips. What scares her more than the potential social ruin is that even she isn’t sure they aren’t right.

There are times when it seems that the bloody battlefields of Europe were easier to navigate than the so-called civilized graces of Society.

Jonathon Lloyd, the Earl of Ruel, has commanded men on the battlefield and women in the ballrooms and bedchambers with his dominant personality. It tears him apart that he can’t command his wife’s terrors to go away. To top it off, he has to battle his grandmother, for Anne’s acceptance as the new Countess.

There are those who will stop at nothing to tear apart the fragile bond between the newlyweds.

As external foes close ranks, Anne is pushed to the wall and forced to face the enemy within and to learn to have faith in herself before she can give herself fully. And Jon must come to grips with what it means to be truly vulnerable in love.

Can Lady and Lord Ruel learn to trust other each enough to keep their love, and her sanity, intact?

Rebecca is in grave danger. Accused of murder and blackmailed by a vicious, powerful aristocrat who demands she help ruin the noble protector she once loved, common-born, gentle-natured Rebecca is in desperate need of help. From the shadows steps forth a man offering her aid–a man she rejected years ago when he was but a youth. Now he appears before her utterly changed, no longer a boy but a man with a dark, mysterious past. How can she trust him? Yet with her time and options running out, how can she not trust him?

Stephen Drake lost Rebecca long ago. Back then, he was too young to keep a woman like
her. Now a spy for the Crown, he has power, funds, a title…and he’s been assigned to follow Rebecca