She hopes to gain his affections

For Miss Elizabeth Smith, sharing her first kiss with the charming Lord Derek Creswell is nothing short of a dream come 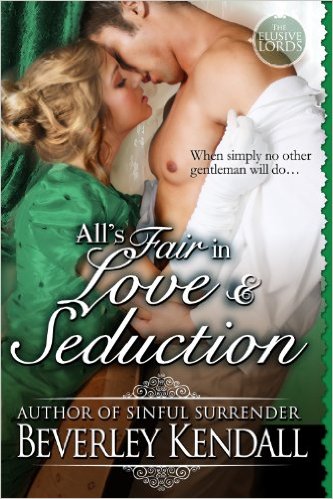 true…that is, until she is spotted by one of the most influential gossips of the ton. With scandal nipping at her heels, to avoid total social ruin, Elizabeth must present a fiancé by the end of the Season. But when the viscount proves reluctant, Elizabeth is forced to employ a seduction of a different sort…

He is determined to ruin her

Viscount Derek Creswell believes Elizabeth set out to trap him into marriage. After all, her sister attempted the very same thing with his brother six years before. Now the delectable Miss Smith expects a betrothal and a ring, while Derek finds her ruination infinitely more appealing…

But as Derek sets out to seduce only her body, Elizabeth is intent on claiming his jaded heart.

Other books in The Elusive Lords series:

The Trouble with Honor

Desperate times call for daring measures as Honor Cabot, the eldest stepdaughter of the wealthy Earl of Beckington, awaits her family’s ruin. Upon the earl’s death she and her sisters stand to lose the luxury of their grand home—and their place on the pedestal of society—to their stepbrother and his social-climbing fiancée. Forced to act quickly, Honor makes a devil’s bargain with the only rogue in London who can seduce her stepbrother’s fiancée out of the Cabots’ lives for good.

An illegitimate son of a duke, George Easton was born of scandal and grows his fortune through dangerous risks. But now he and Honor are dabbling in a perilous dance of seduction that puts her reputation and his jaded heart on the line. And as unexpected desire threatens to change the rules of their secret game, the stakes may become too high even for a notorious gambler and a determined, free-spirited debutante to handle.

After enduring years of her nobleman father’s cruelty and abuse, Celestina Lunde is ready to take her own life rather than 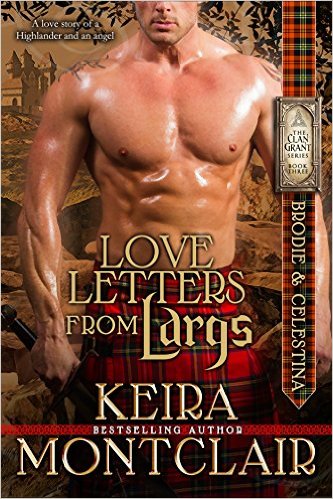 enter into an arranged marriage with an equally brutal man. But just when she is about to leap through the window of her tower bedroom, a brawny Highland warrior arrives at her home and changes everything…

Summoned to the royal castle by the King of the Scots, who is preparing for war with the Norse, Brodie Grant’s mind is on battle when he first spies the breathtaking Celestina perched on a window ledge. The sadness in her eyes makes him turn his horse around against his laird’s orders. He intends only to save the lovely lass, but after touching her once, he can think of nothing and no one else. There’s one problem: Celestina’s intended is an important man, and the king has just as much at stake in her arranged marriage as her father does. Will Brodie be able to do as he’s ordered and stay away?

A testament to love’s ability to transcend the most harrowing of obstacles, Love Letters from Largs is the emotional story of two soul mates who are determined to be together when everyone around them seems intent on pulling them apart.

Available through October 25 For $0.99 at AMAZON

She wanted just one naughty carriage ride…
Beth McConnell has a secret. Sometimes in the afternoons, she escapes the drudgery of her family’s shop and seduces wealthy gentlemen. One encounter is all Beth allows. She must leave them burning.

New York Merchant Prince Grey Sexton loves the audacious, spirited young temptress who seduced him in a Philadelphia bookseller’s and made passionate love to him in his carriage. Her fiery nature broke through his cold self-protection.

Beth McConnell loves her husband-to-be very much, yet she wonders if she will ever be able to present herself as the respectable lady he needs for his wife.

What started out as a secret, tumultuous affair has blossomed into something neither of them can live without. But under the strains created by the differences in their social rank, they begin to have serious doubts about the future. And dark secrets from their past threaten to tear them apart.

Can their love prevail?

In the wake of a devastating epidemic, sheltered Emily Eliot finds herself alone, making her own decisions for the first time. When desperation leads her to sell her virtue, she walks straight into trouble.

Enter one gorgeous, golden haired gentleman bent on protecting her.

Alexander Dalton came to the Blue Duck Tavern seeking to lose himself in sexual pleasure. But when he saw the delicate and vulnerable young woman, he couldn’t turn away.

Love is the most seductive sacrifice of all. Before he can share his deepest, darkest secrets with her, he has to show her what seduction truly means.

For the first time in a long time, Alex is genuinely happy. He’s found a woman he can love. Now he wants only to enjoy his life. But the past won’t let him go. His dark secrets threaten to engulf him. Yet how can he tell his innocent fiancée about the horrific things he’s experienced?

Emily finds herself locked in a battle with the darkness that appears to hold Alex captive. As he reveals more of his inner torment, as he seduces her into carnal decadence, she wonders who is this man she’s so desperately in love with. 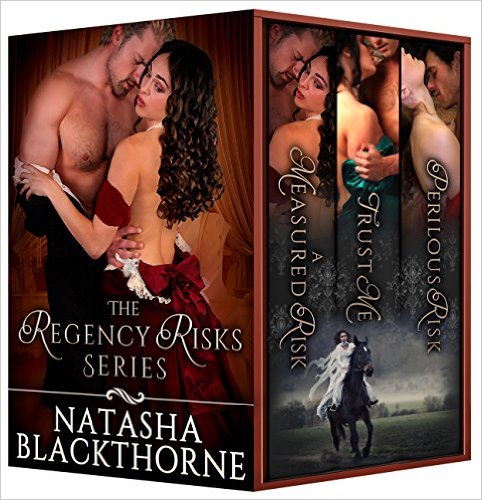 He is her most dangerous temptation and now he is demanding her submission. Dare she take the risk?
Book one in the Regency Risks Series

Emotionally scarred in the horrific accident that took her husband’s life, Lady Cranfield is imprisoned by her lingering terror of horses and carriages. She longed to be closer to the fascinating Earl of Ruel. She sensed intuitively that he could teach her how to overcome the terrors that held her in bondage.

And now she’s willing to risk almost anything-her reputation, even her virtue-to find out. But what he proposes startles her.

When the shy, studious and socially awkward young widow approached him, Ruel instantly sensed she would be the sweetest, most submissive experience of a lifetime-if only he can gain her total and complete trust. He makes her a non-negotiable offer. His help in return for her submission and obedience.

But Lady Cranfield grew up neglected by her ducal parents, raised by servants and then later ignored by her handsome, charming husband. She’s learnt to protect her heart at all costs and she trusts no one but herself.

How can the jaded Earl of Ruel break through her self-protective defences and show her how to love when he has spent his lifetime avoiding that tender trap?

Trust Me is the sequel to A Measured Risk

Anne and Jon’s love was born in isolation. Now necessity has thrust them back into Society. Will their fragile bond survive the strain of slander and scandal?

All of Mayfair is staring at her and wondering if she is insane.

Anne Lloyd, the new Countess of Ruel, thought she’d finally begun to heal from having witnessed the terrible death of her first husband. But, from her new husband’s grandmother to his ex-mistresses, it is all that is on everyone’s lips. What scares her more than the potential social ruin is that even she isn’t sure they aren’t right.

There are times when it seems that the bloody battlefields of Europe were easier to navigate than the so-called civilized graces of Society.

Jonathon Lloyd, the Earl of Ruel, has commanded men on the battlefield and women in the ballrooms and bedchambers with his dominant personality. It tears him apart that he can’t command his wife’s terrors to go away. To top it off, he has to battle his grandmother, for Anne’s acceptance as the new Countess.

There are those who will stop at nothing to tear apart the fragile bond between the newlyweds.

As external foes close ranks, Anne is pushed to the wall and forced to face the enemy within and to learn to have faith in herself before she can give herself fully. And Jon must come to grips with what it means to be truly vulnerable in love.

Can Lady and Lord Ruel learn to trust other each enough to keep their love, and her sanity, intact?

Rebecca is in grave danger. Accused of murder and blackmailed by a vicious, powerful aristocrat who demands she help ruin the noble protector she once loved, common-born, gentle-natured Rebecca is in desperate need of help. From the shadows steps forth a man offering her aid–a man she rejected years ago when he was but a youth. Now he appears before her utterly changed, no longer a boy but a man with a dark, mysterious past. How can she trust him? Yet with her time and options running out, how can she not trust him?

Stephen Drake lost Rebecca long ago. Back then, he was too young to keep a woman like
her. Now a spy for the Crown, he has power, funds, a title…and he’s been assigned to follow Rebecca